We all recognize this: when there were just loads of these sorts of games. Yet trying to keep up with the latest innovations and trends make us forget about classy things. We’ve summed the best old-schools car racing games ever created from years gone by.

For lots of us, this racing game was where it all started. The final progression of the Pole Position idea, only this time, you were driving an awesome Ferrari down palm-lined boulevards at speeds that would have given Atari developers an aneurysm.

What makes it more fun is the ability to keep car motionless while animating the confines on the road. The successfully hypnotic strategy, isn’t it? 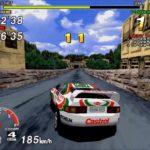 There you could see Desert, Mountain, Forest and Lakeside courses. What is really impressive about this game is that you have the grant to pilot Toyota Celica GT-Four or a Lancia Delta Hf Integrale.

There are few options to choose from, including arcade, time attack, and two-player mode.

The visual has aged but, to tell the truth, they are very good. The music, sound effects, and speech are fantastic. So this game is one of the best to prove that Sega is responsible for some of the best car games ever made!

Super Monaco GP on Sega arcades and the Mega Drive was the first experience of a racing game for most of us, wasn’t it? That’s why all we know that this game is truly astounding.

A well-received championship mode allowed the player to compete to win the F1 World Title over several seasons. This was a break from tradition from linear games.

Super Monaco GP also started a trend by being the first racing game to feature a rearview mirror.

The arcade version of the game is more straightforward in design featuring only one track while the Mega Drive version allows the player to fail to qualify and begin the race from the back of the grid.

Formula 1 is definitely one of the best F1 games ever. So, let’s remember what makes it so special.

First of all, you can race as any of year’s initial crop of drivers in any of the 2009 Grand Prix races individually or as part of the entire season

A Career mode allows you to race through three seasons as a custom-made character starting out with one of the weaker teams and rising to one of this year’s top teams.

But some factors could be improved, for example, the sound, that is uniformly poor, or the race engineer on a radio, that is pretty annoying. Nevertheless, the majesty of this game is hard to underestimate. 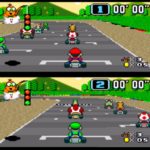 Everything began from the idea of taking the Super Mario World universe and squeezing it into a kart-racing game. It sounded like a crazy idea at the time, but look at what we have there: to play this game today is every bit as enjoyable as it ever was. So, let’s reveal why!

The created illusion of 3D, which was visually quite impressive back then, is still passable even today. There is a good sense of speed, too, especially on the 150cc cup, where the action comes fast and furious. Eight different characters from the Mario universe that you can choose, use of weapons, nice and tight tracks make this game full of fun.

Once you hear the name of this game, the old school spirit appears and got you back into gaming.

What makes it really special is the considerable variation of mooves, like the Crazy Boost to speed forward or Crazy drift to… drift, you guessed! The gameplay is untouched from the Dreamcast original and has all of the modes, including Crazy Box and both Arcade and original cites.

Playing Crazy Taxi gives a lot of fun, especially when you see dozens of excited passengers on the street waiting for a trip. Like in real life, cash is what you need to be a world-class cab driver, so the faster you get your passengers from one place to another, the higher are your chances!

Simpsons Hit and Run was a fabulous game that had its unique story and finally let players explore Springfield like never before. An insidious cola is controlling the minds of the citizens while Springfield is being overrun by mechanized bees, magical black vans, and autos.

One of the most significant things is this game is that it is full of humor. From the start of the tutorial, the characters make many asides that show they’re aware that they are in a game. This boost dialogue between the player and character that increases self-awareness.

Each level also has one bonus mission and three non-story-related race missions.

A Career mode allows you to race through three seasons as a custom-made character starting out with one of the weaker teams and rising to one of this year’s top teams.

But some factors could be improved, for example, the sound, that is uniformly poor, or the race engineer on a radio, that is pretty annoying.

Nevertheless, the majority of this game is hard to underestimate.

In changing times, some things will always stay constant. Hope, you agree with our pick of old-school racing games. Let us know in the comments!

All About Working In Canada As A Foreign Student

Crucial Steps of Mobile App Development You Should Not Miss