Suppose you’re a fan of games and like to play many mobile games, and have an eye on the industry. Then you’ve got the news that the Google and Apple stores have removed Fortnite. There’s a way you can play it on your Android device, whether you’re a Fortnite player or if you want to play it.

This would be best if you remembered that this download does not come from the Google Play store as Google has removed it.

Just small information on why it was Pulled from their respective stores by Google and Apple. The latest update for the game was rolled out by Epic Games, the developers of Fortnite. In the latest update, players are able to buy Vbucks directly from the company. Through this, developers can escape the 30 percent fee paid by both Google and Apple to purchase their respective stores. Apple clicked back on Epic Games after the latest update and pulled Fortnite from the App Store. Google also took the same direction after Apple and removed the game from the Play Store.

There is quite a legitimate way to download the game for game lovers and players of Fortnite. The Fortnite from this method is the developers’ official game, and you don’t need to go through some apk site and download the apk.

This doesn’t matter what manufacture phone you are using. As long as it’s an android phone, you can get access to the legal file of Fortnite. In this way, you have to sideload the Fortnite game.

Well, Open any of the browsers on your android device and type Fortnite on Android on the search bar. Then, You will find the epic game website where you can download its game launcher.

Next, After downloading the launcher, install it, make sure you have turned on the toggle “install from unknown sources.” Well, Once the game launcher installation will be finished, open it, and there you will find two games that you can download.

Select Fortnite from the two and tap on it to download and install the apk of Fortnite. This is the same way you download the Epic Games launcher.

The download and the installation will take up to 10 minutes or maybe less than that. Next, Once finished, you will be able to play the game regularly as it was before. 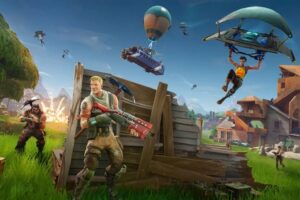 As well, Samsung users are lucky enough as they don’t need to download epic games launcher. Thus, They don’t have to go through the extra hassle of downloading the game.

This epic game made Fortnite available on Samsung phones, first with an agreement with Samsung.

However, To download the game on your Samsung device, visit the Galaxy App store on your device. Now, search for Fortnite and tap on install; it will install in a few minutes.

This is a more straightforward and easy process as you don’t have to download it through Epic Game launcher.

Well, there is no other way to download it to date for iPhone users as Apple doesn’t allow users to sideload any app.